The other night my friends and I were walking down Broadway and got caught in one of those intense summer rain storms that come out of nowhere. Luckily we were right in front of The Stadium Cafe and ran inside for a late dinner. The Stadium Cafe is not a place I normally go to, I'm not particularly a fan of sports bars and this one boasts a whopping 25 TVs, but I thought we could give it a try. Even though the place was packed for a Wednesday night we were seated almost immediately after pushing together two of the high tables.

I wasn't really in the mood for something fried, but I was still really hungry and wasn't sure what I wanted. Luckily, Stadium has a pretty extensive menu that offers more than your average bar food selection. I ended up going with the Greek Salad that came with roasted red peppers, artichoke hearts, kalamata olives, feta cheese, tomatoes and grilled chicken. Since I don't eat chicken I asked if they could substitute grilled shrimp instead. Almost an HOUR later our food finally got to us... 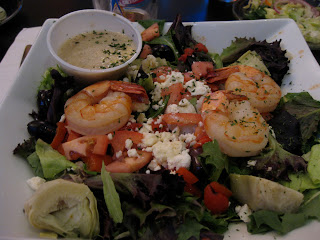 It's a pretty beautiful salad but I was disappointed that it only came with three shrimp. Not to mention the fact that even though it was a substitution and not an addition, I still got charged $5! For three shrimp! Despite that, it was a classic Greek salad that satisfied my craving. Yet, I was still hungry after eating most of the salad and ended up doing what I had told myself I would be able to resist: eating a gross amount of french fries. 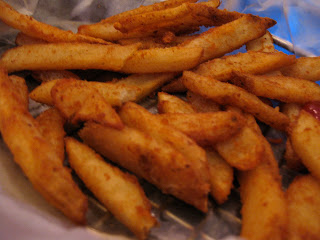 Once you start, you can't stop. Beer battered french fries are pretty much always addictive and these were no exception. I just couldn't stop, they were so good. The worst part is that they weren't even mine...sorry Dan for eating all your fries.

Two of my friends ended up getting the salmon dish that came with rice, vegetables, and either a soup or salad. 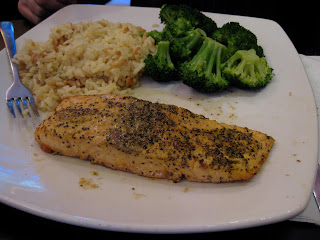 Pretty good deal if you ask me. The salmon was decent, I think I could have gone for a little more sauce, but I was still impressed that a sports bar was able to offer such a healthy meal, the broccoli was steamed and everything. It was a little bland though, and I think maybe they haven't gotten the memo that just because it's healthy doesn't mean it can't be exciting. Throw some garlic and lemon on that broccoli, jazz up the rice a little bit...the possibilities are endless. All in all though it was a very filling meal which made me think that maybe I should have gotten this dish instead of the salad, but now I know for next time.

The last meal ordered was the Saratoga Special that came with a cheeseburger, saratoga chips and a bottle of saratoga lager. 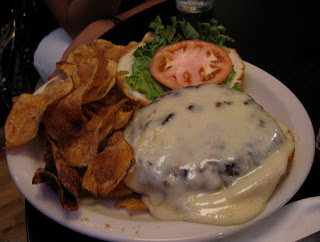 Look at all that cheese. This was definitely what I expected when I imagined the menu at Stadium, and my friend who ordered it was not disappointed.

After we were all done with our meals and snacking on fries and beers until our check came, the power flickered on an off from the storm. It's strange, I realized that I had never been in a restaurant before that lost power. Turns out the momentary black out messed up the computers and so we had to wait for our check. And wait. And wait. Our waitress brought us over a round of beers on the house, but it's still pretty frustrating to have to wait so long when you're done eating and pretty much just sitting around...though I feel like it wouldn't have been so bad if it was a weekend and we didn't have to wake up early for work the next morning. Our waitress finally ended up just writing out our check for us (thank you) and we just had to make sure that we had enough cash since the credit card machine was also down.

After a long night at Stadium, I'm not sure if I would go back if it were my choice. Maybe it was the atmosphere - I'm not too into excessive sports memorabilia or TVs. Maybe it was the service - when I'm really hungry I'm not in the mood to wait almost an hour for food. Either way, it was nice to have a place to shelter us from the rain and provide us with food, beer, and a view of the Olympics on the big screen.
Posted by Aliza at 1:36 PM
Email ThisBlogThis!Share to TwitterShare to FacebookShare to Pinterest