I've been so excited about Druthers lately, and so has the entire community. I feel like even it's presence on Broadway has given Saratoga a little confidence boost. I went there for lunch the other day with a friend who was visiting from out of town and she was certainly impressed (as was I) with Saratoga's newest brewery and restaurant. We chose to sit outside and enjoy their patio, a quiet little haven from downtown's hustle and bustle. Our waitress beautifully described the beers on tap (I'm always impressed when people can describe beer and wine, I'm such an amateur) and I ended up choosing the summer ale while my friend went with the blonde. 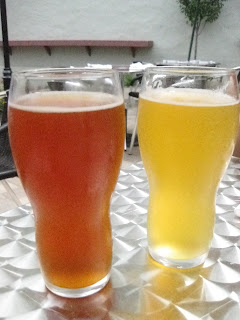 Next time I'll have to do a tasting, all of their beers sounded delicious! And I also liked how even their water glasses were "given your druthers". Classy. 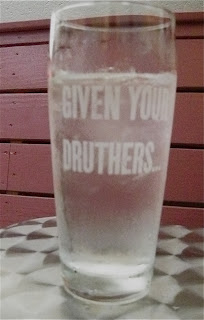 While we were deciding what to eat, we asked our waitress about the space. It honestly seemed like Druthers popped out of nowhere...what had been there before? How was it possible that there was that much unused space on Broadway? Our waitress said she wasn't sure, she had just moved to the area, but to her credit she came back five minutes later with the story - turns out it was an empty alley/courtyard barely used by a neighboring building. The history was pretty cool, but I think the way our waitress went to ask for us really epitomizes the Druthers staff - everyone is extremely friendly and willing to talk to you and ensure that you have a great experience. What more could you want?

My friend and I had a really difficult time deciding between two dishes, so we just got both to split. Let's start with the Something Vegan Barely Burger. 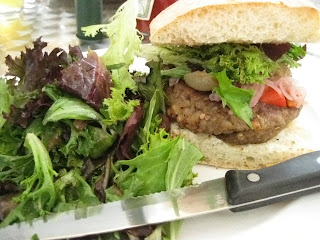 The burger itself was pretty substantial and impressive for a homemade vegan burger, but it was the toppings that made this burger shine. Roasted garlic, peppers and onions topped off with pickled shallots...yum! I could have gone for a little more of a kick, maybe some chopped up jalapenos in the burger or something, but overall it was a very filling and delicious vegan burger.

Next up is the Sweet Potato and Black Bean Burritos that came with salsa and roasted corn with some queso fresco drizzled on top. 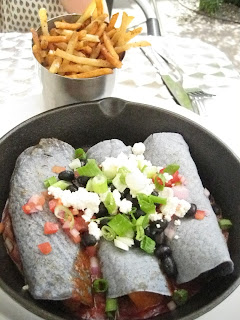 These burritos stole the show. They are not your typical burritos, so you can't go into it thinking it's going to be a Chipotle experience or anything. They are served over a smoked tomato sauce that brings out the smooth sweetness of the potatoes and black bean salsa. And let's not forget those crispy little fries that come with it, so good. When I first saw the burritos in their cast iron skillet I thought maybe it would be too heavy for a hot summer day, but it was perfect. Filling, healthy and flavorful. You should probably try one next time you're there. And since it comes with three burritos, it's already perfectly set up for sharing!

After we finished up our meals we wandered inside to get a better look. The first floor has even more seating (this place is huge!) and the second floor is dedicated to the brewery itself. We were informed that they are going to start tours after track season, which is understandable, it seems like almost every restaurant is waiting until after track season to take a moment to breathe. I can't wait to take a tour and learn more about the brewery and the guys behind the business.
Way to go, Druthers!
Posted by Aliza at 11:15 AM
Email ThisBlogThis!Share to TwitterShare to FacebookShare to Pinterest