Sometimes it's hard for me not to see Bailey's as just a bar, probably because when I walk past it on weekend nights it sounds like a club from halfway down the block. But I'm all for trying new things, and I don't want to judge a book by its cover or a bar by it's cover band (pun intended). So when a friend and I made a lunch date, I suggested we try something new and check out Bailey's Cafe.

We walked in and went straight to the patio, it's way to beautiful out to be inside! Sitting outside were a bunch of families and young professionals out to lunch...certainly toning down the crazy bar preconception I had. It seemed like a couple of young families had come straight from the library, which is pretty adorable though at times we could hear some angry honks from the library parking lot that was right up against our table. Despite that, it was a relatively calm setting and I was ready to check out their menu to see what they had to offer.

I went for a lobster roll that our waiter said "was everyone's favorite" and a cup of their corn chowder. 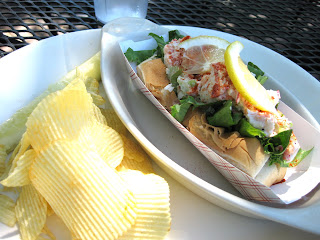 The lobster roll wasn't necessarily anything exciting, but it was a classic tribute to summer. The paprika and lemon really brought out the lobster that can sometimes get lost in the sea of white bread. Add the crinkle cut potato chips and you've got summer on a plate. And since fall is soon approaching, I went straight from the lobster roll to my cup of corn chowder. I appreciated that the corn chowder was on the lighter side, any heavier and I would have been over-full with my meal. The chowder wasn't very thick and had a definite spicy kick to it...there also wasn't any bacon in it (which I know can be a deal breaker for some) but was still made with chicken broth so it wasn't completely vegetarian.

My friend ended up ordering The Annandale panini and a cup of lobster bisque. The panini came with roasted red pepper hummus, artichoke hearts, spinach, red onion, and provolone. What a perfect combination! 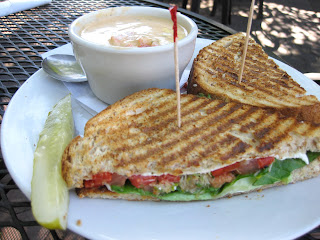 This was her first experience with lobster and she was so excited and took her first spoonful...and it was cold. And lobster bisque is definitely not one of those soups that can pull off both hot and cold. A few minutes later our waiter ran over and said that he didn't realize that he was supposed to heat it up and took her cup back to the kitchen. It was nice that he came back after he realized his mistake...but no one likes to think about their soup just sitting around in the kitchen getting cold...luckily her sandwich was pretty amazing and the bisque tasted pretty decent after being reheated.

I can see why Bailey's is a good place for families, it's got a bunch of steadfast favorites that even the pickiest of eaters can find something on the menu as well as a casual atmosphere and spill/food throwing proof patio. And as the day goes on they've got some great looking happy hour specials as well as nightly deals that I featured on my week of specials post. I'm not sure if Bailey's the kind of place that I would go to if I wanted to try adventurous and creative food, but it is able to serve as a Saratoga staple, both for little kids during the day and big kids at night. Do you have a favorite meal there?

Don't forget, there's one more day to enter your name for the Eat Good Food $20 giveaway! And I'm also eventually hoping to update my week of specials post, so let me know if there's anything that I left out.
Posted by Aliza at 4:55 PM
Email ThisBlogThis!Share to TwitterShare to FacebookShare to Pinterest