So Many Things Happening!

Hey guys! Remember when I posted on Facebook that I had a lot going on? Well let me tell you! My boyfriend (aka my date) got offered the ultimate dream job that is allowing us to move to New York City. This is amazing news, for me it's moving back home, and we couldn't be more excited. It also means we're getting ready for another move after just settling in to our new place AND it's my last week of grad school finals AND the holiday season is upon us...so lots of things going on...

So unfortunately that means that I'll only be able to write Savoring Saratoga for another couple weeks. I've had so much fun becoming part of Saratoga's blogging community and getting to know people in the restaurant business, as well as hearing from you guys. When I first started I wanted to try as many restaurants in Saratoga Springs as I could, and I would say I got pretty close. Savoring Saratoga has meant so much to me...so if we end up going out to dinner between now and moving day I'll write a few more reviews but then it'll be So Long Saratoga!

Here are some of the amazing meals we've had since the last review... 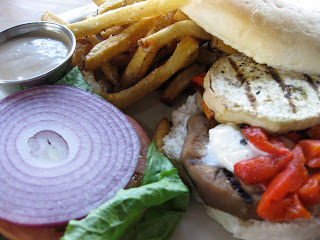 An incredibly satisfying lunch: vegetable burger at The Local 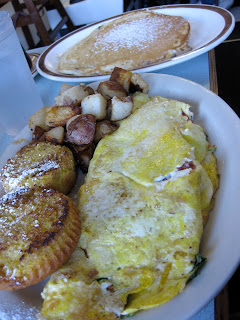 At the Triangle Diner my date got a ham, spinach and cream cheese omelette, hash browns and a grilled pumpkin muffin. With a side order of blueberry pancake of course. 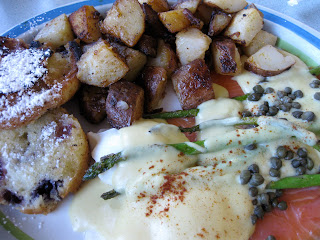 I couldn't help myself, I got exactly what I got the last time, two poached eggs, smoked salmon, capers, hollandaise sauce, asparagus, hash browns and a grilled blueberry muffin. BEST BREAKFAST! 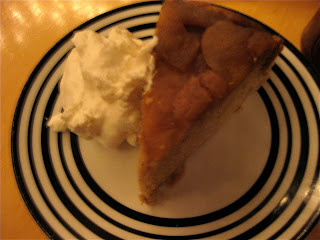 Upside Down Apple Cake at Cafe Lena with homemade whipped cream, what a
great dessert for a great show! 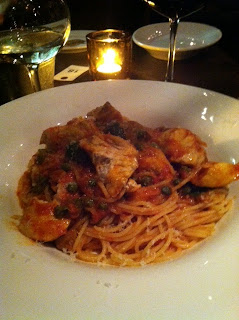 Pasta at Chianti's with swordfish, capers and olives in a red sauce. Wowza.