I've been excited to try Henry Street Taproom since the day it opened. I've had drinks and appetizers there, but last weekend was my first time there for a meal and I was pumped. A bunch of my friends wanted to try it too so six of us met up around 7:30 on a Saturday night for dinner. We tried calling ahead of time but unfortunately they don't take reservations so we thought we would try our luck and if there was a wait, we could just hang out at the bar. When we got there we put our name on the list and were told that it shouldn't be very long.

A half an hour later we were offered one of the small high tables. I couldn't imagine all six of us fitting at this table, and certainly not with six plates, so we said we would wait for a bigger table. A half hour after that we were seated...apparently everyone had gotten their checks, paid, and then were just hanging out at the table. I don't blame them, once you've got a seat at a hopping bar it's hard to give it up, but it stinks to have to wait that long. So after a whopping hour and twenty minutes after we walked in the door, we placed our order.

Our waiter was funny, helpful and enthusiastic. He helped us work our way through the restaurant week menu and apologized for the wait. I think he, and the decor, really embodied what Henry Street Taproom describes on their Facebook page: passionate but never pretentious. I love everything about the decorations, the boar's head over the fire, the trendy lighting, the industrial feel of the bar, I love it all. While everyone else ordered appetizers from the restaurant week menu, I couldn't help myself, I went for some cheese. 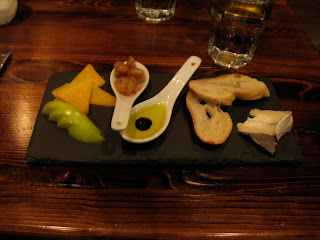 How amazing does that look? I got the Humbolt Fog (right) and a goat cheese gouda (left) that I can't remember the name of, but they were both incredible and I loved pairing them with the bread and fruit. Henry Street Taproom as an extensive cheese menu (probably as many cheeses as beer?) and while it is a bit on the expensive side I thought it was worth it.

One of the other appetizers ordered was the Scotch Egg, a soft boiled egg wrapped up in chorizo and fried. I had never heard of this before so I had no idea what it was going to look like...or taste like.... 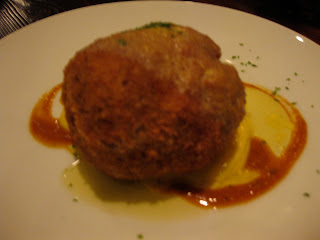 This, like many of the dishes on their menu, was an unusual combination of tastes and textures that somehow worked out perfectly. The Scotch Egg was spicy from the chorizo yet creamy from the egg, definitely something worth trying.

Some other friends also ordered the Roasted Fall Vegetables for an appetizer, a lovely salad to start off your meal.

The last appetizer was the duck pate with berry coulis, which I didn't try but my friend was very happy with. 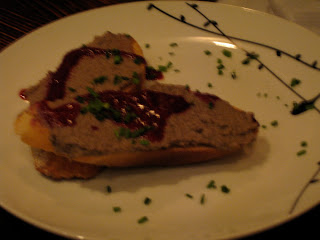 And now onto dinner! I got the Falafel... 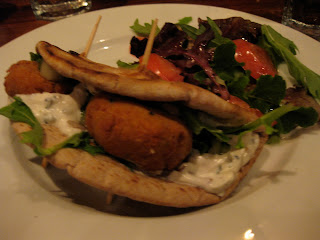 The Falafel was the only thing served that I wasn't particularly excited about. It tasted fine, but I think I prefer my falafel a bit on the crispier side...but as one of the few vegetarian options it wasn't too shabby.

The Fish and Chips on the other hand were the perfect amount of crispy and came with ketchup, tartar sauce, and cocktail sauce (I'm all for smothering cocktail sauce on anything and everything) 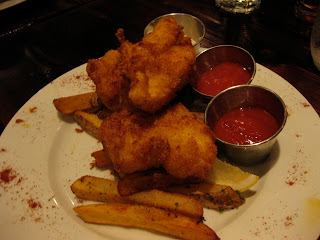 The quality of fish was great, and you felt like you were actually eating fish as opposed to fried-ness with a little bit of fish here and there. That's one thing that I really appreciated about Henry Street Taproom, it seemed like they really prioritized quality ingredients, something that always makes a difference.

The last entree was the Carolina BBQ Chicken Sandwich that came with brussel sprouts slaw and parsnip chips. 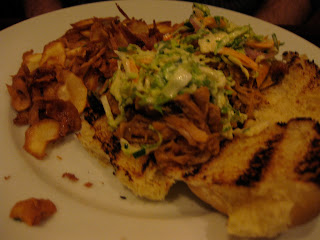 I'm loving the parsnip chips instead of potato chips! The only issue that we had was that one of my friends asked for the sandwich without bread which never happened. A small mistake that the waiter then apologized for, which to be honest I didn't mind because that meant I got to have some BBQ soaked bread! 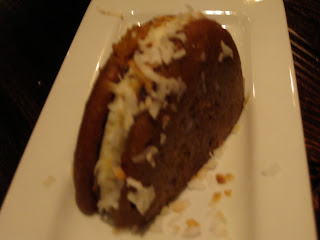 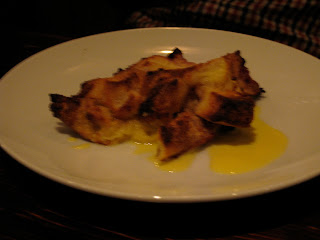 At first I was disappointed that you only got half of a whoopie pie, but it was so rich that it ended up being the perfect amount...I also loved the toasted coconut! The cranberry bread pudding was a little dry for me, but my friend who got it was happy with her dessert.

Overall I had a great experience at Henry Street Taproom, despite our long wait for a table. I think that this isn't necessarily a place you would go with a big group, maybe on a date or to catch up with a friend, but it just isn't a big enough space for large parties. I also felt that even though the prices may seem expensive, you're paying for high quality and creative food, so it's worth it. Have you been there yet? Do you have a favorite dish, or maybe a favorite beer?
Posted by Aliza at 3:47 PM
Email ThisBlogThis!Share to TwitterShare to FacebookShare to Pinterest