When I think of Irish pubs in Saratoga, I think of The Parting Glass. Some friends and I went there the other night and were greeted at the door by an Irish band playing some traditional tunes and a long list of beers on tap. Irish music, great beer, and pub food...what more could you want.

We sat ourselves at a long table with laminated menus as our place mats...it's that kind of casual place where you see friends meeting for drinks along with families with little kids and the "regulars" coming in for a beer after work. Everything about the place is welcoming, from the atmosphere to the staff. They've also got these great paintings on the wall that my friend and I were admiring, portraits of old Irish men that had such character to them. After settling in we ordered our drinks and an appetizer of Irish Nachos which consists of waffle fries, melted cheese, bacon and sour cream. I was able to avoid the bacon and enjoy some waffle fries with cheese and sour cream, yum. 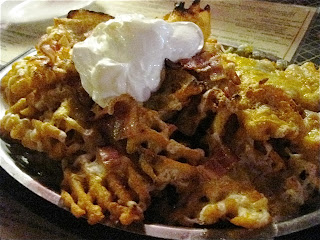 And so speaking of fried, I got fish and chips for dinner! The fish was very heavily fried, a little too much for my taste, but the tartar sauce was chunky and flavorful which made up for it. And then of course the beer battered fries that came with it were amazing but I could only make a small dent in my meal, it was all a bit too much for me after having those nachos. There's only so much fried I can take! 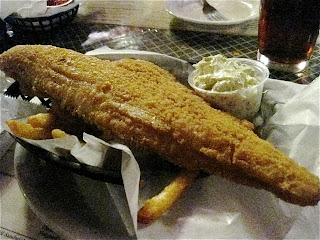 So I probably would have gotten the fish and chips anyways, but it's worth mentioning that there are very few vegetarian options on the menu. And if you're a true vegetarian (and don't eat fish) there are only a couple salads, a veggie wrap, and a veggie burger. Granted, it is an Irish pub and it's not like they're known for their vegetarian food, but it's good to know ahead of time if you don't eat meat.

One of my friends ended up getting an order of calamari and a caesar salad for dinner. The calamari was way too heavily breaded and you practically forgot what you were eating! And I think I could have gone for a spicier sauce. 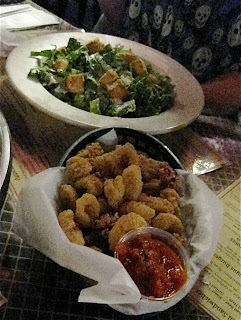 Kudos to my friend though for ordering a salad, I think it was the only not-fried thing on the table. Hmm...I'm looking at all the pictures I took for this post and realizing that they are all coming out super grainy and dull, what's up with that? Maybe it's a combination of my poor camera skills and how dark it was, but still...normally things look a little more appetizing than that...sorry!

The two other entrees ordered were the O'Reilly sandwich and the Rasher sandwich. The O'Reilly was filled with corned beef, swiss and mustard while the Rasher was filled with imported bacon, ham, cheddar and mustard. Both came on egg battered bread (so basically on french toast) and a side of whatever kind of fries you like (sweet potato, onion rings, beer battered, etc). 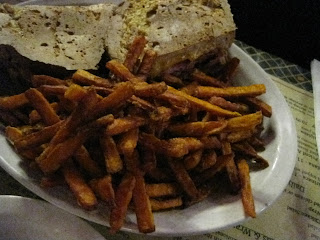 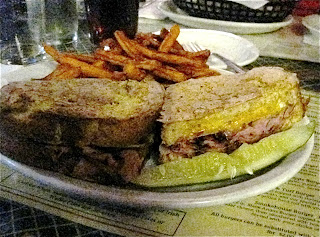 My goodness those pictures are horrible. I don't know what happened. These sandwiches were intense, I honestly don't know how both of them finished their meals. There was so much meat, and so much bread, had I gotten one I would have done the eat half, save half for lunch move. I say that now though, but we all know that once you get started in on a great meal, it's hard to stop! All of the food at The Parting Glass is good old fashioned heavy comfort food, good to add a bit to your waistline for the winter. When our waitress came to ask us if we wanted dessert or more beer, I think we all looked at her with glassed over eyes looking like "seriously? do we look like we can eat more?"...we practically had to roll our way out the restaurant. All in all, The Parting Glass is a place that I love to go to every once in a while for a fried-tastic, weigh you down kind of meal. There's a great atmosphere there, and always something going on from live music to trivia to Irish step dancing, that makes The Parting Glass a great addition to the community.

Posted by Aliza at 10:48 AM
Email ThisBlogThis!Share to TwitterShare to FacebookShare to Pinterest