We live really close to Forno Bistro and hadn't been in years so thought we would try it out for dinner one Tuesday night. Walking up to the patio I was hopeful, but as soon as we walked in to our table I remembered why we kept shying away from Forno. The inside of Forno is incredibly dark and there are so many intense metal sculptural things on the lights, mirrors, and ceiling that you almost feel like you're walking into a medieval dungeon. This sort of design approach might have worked in a much bigger space where you had room to appreciate each piece, but there was so little space between metal figures and tables that you felt crowded by both the atmosphere and other diners. Some sections of the restaurant was better than others, but from where we were sitting I was very aware of all the twisted metal surrounding me.

Once we were seated we were immediately greeted by our very friendly waitress and given menus and water. While we were looking over the menu to figure out what we wanted to order we witnessed a very sad sight. Since we were maybe eight inches away from the next table we got to hear the entire conversation of the couple next to us. Conversation may not be the right word though, since the guy was on his phone at least 80% of the dinner. I felt so bad for the girl, at one point she actually reached over to shake his hand and introduce herself in an attempt to point out how rude he was being. Good move I thought, but it had no impact on his atrocious behavior. I remember even thinking "man, I hope this is a first date so she can kick him to the curb"...and then I saw the rings on their fingers and realized they were in it for the long haul. This goes for both the ladies and gents...when you are out to dinner with ANYONE, be it a significant other, friend or family member, PUT AWAY YOUR PHONE! Answer it only if it's an important call, but anything else I promise can wait until the end of the meal. Enjoy the food, enjoy the company, and have some common decency.

Alright after that quick etiquette detour, let's get to the food. We weren't particularly starving and wanted something light so ended up ordering two appetizers and a salad. We started with the Mozzarella Caprese, a mixed salad with mozzarella, tomatoes, olives, basil and balsamic. 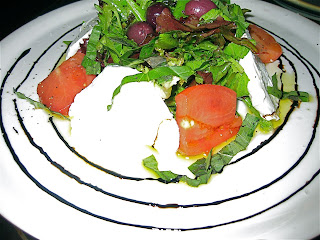 While the rings of balsamic reduction made for a nice presentation, I think I would have liked it drizzled over the salad itself. I appreciated the twist on the classic caprese salad but I missed having balsamic as more of a key player and thought the olives were a little overwhelming at times. There was also something that kept bugging me...and then suddenly I figured it out: the salad was incredibly salty. Why would you put that much salt on a salad? I didn't get it.

Next we got the Gamberi E Carciofi, a roasted dish of shrimp, cannellini beans, tomatoes and artichoke hearts. The dish was still sizzling as it reached our table and smelled delicious - it was also a fairly large portion and could have been a meal on its own I think. 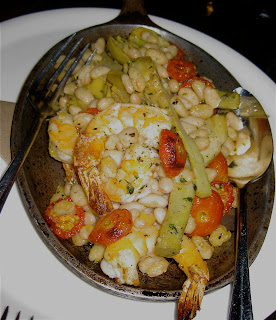 The beans and shrimp made this dish very filling, but that didn't stop me from making sure the dish was scraped clean. I loved all of the fresh thyme and olive oil, sometimes all you need is some fresh herbs and high quality olive oil to make a dish. Unfortunately this dish was a little over salted as well, but besides that it was quite good.

I liked that our dishes came out one by one, and last to come was the Involtini Di Melazane, eggplant wrapped around ricotta cheese covered with melted mozzarella and marinara sauce. Talk about comfort food. 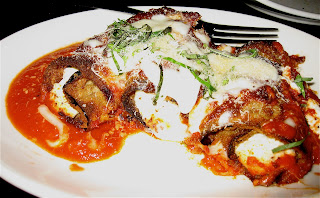 Sorry that's such a bright picture, because it was so dark in the restaurant I had to use a pretty intense flash to see the food. These three eggplant rolls were full of cheesy deliciousness that hit the spot. Again, this could have been enough for a light meal, so it was nice to have these two appetizers to split along with the salad, any more and we would have definitely had leftovers (never a bad thing, but can lead to overeating sometimes when there's that much food put in front of me).

Overall the food was good, even though it was over-salted at times. But it's hard for me to get over the atmosphere at Forno. Unless we were sitting on the patio or ordering food for take out, I don't know if I'll be visiting them any time soon.
Oh well.
Posted by Aliza at 12:33 PM
Email ThisBlogThis!Share to TwitterShare to FacebookShare to Pinterest