Saratoga Springs has been in some serious need of a true tapas bar for a while now, so I could not have been more excited for Boca Bistro to open on Broadway. Walking in I was already in love, the industrial design and bustling atmosphere makes it a hopping place on any night. There were five of us but we had no problem getting a table, right next to a huge metal pig sculpture that was pretty awesome (I would have taken a picture but that might have been awkward for the family at the table in front of it). On our way to our table we passed by the bar...I can't wait to go back for happy hour, the bar was beautiful and glamourous, and big enough so that you won't feel cramped. Always a plus.

Tapas are great for the person who likes to try a little bit of everything and I loved going with a group of friends so we could all share a bite of each small plate. The only thing was, I was the only one in the group who recognized anything on the menu! No worries there - I ended up ordering for the table which I was nervous about at first but it worked out well in the end. I wasn't sure how many tapas to order, but our waitress was extremely helpful. She recommended starting with a tapas per person and then ordering more as we go if we were still hungry. How fun does that sound? I took a look at the menu, saw how hungry my friends were and thought to myself "alright, let's do this" and began ordering.

We started with Datiles Rellones, dates stuffed with almonds and wrapped with bacon. 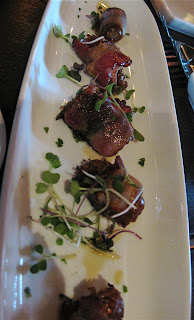 How cute are those, everyone gets a savory bite of deliciousness! And some Croquetas Jamon, that looked pretty tasty but were filled with ham so I offered mine up. 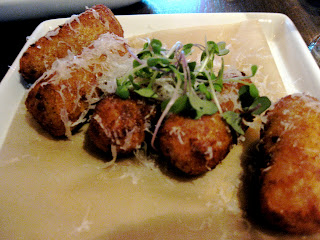 We also got Patatas Bravas, potatoes with garlic aioli and salsa brava. I normally like my patatas bravas with a little more sauce, but these still hit the spot. They were crispy and full of flavor, I couldn't stop myself from picking at them after everyone had served themselves. 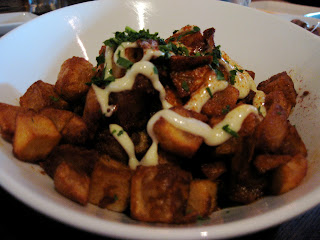 Same goes for the Calemares Fritos. They somehow made their way towards me after everyone got some and I just couldn't. stop. eating them. 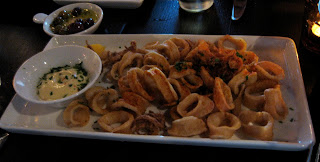 The calamari was lightly fried and sprinkled with paprika with a great texture, especially when dipped in the garlic aioli. Yum.

Last but not least for round one, Tortilla Espanola, the best way I can describe tortilla is like a spanish omelette with onions, potato, and paprika. For some reason, this one wasn't in the tapas section but in the verduras (vegetables) section of the dinner menu. Oh well, it was still bite sized and delicious. 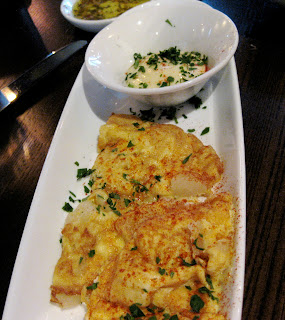 And see the aioli on the side? Notice a pattern? Even though having tapas for dinner seems like a light meal, you definitely leave having had your fair share of aioli and olive oil. All worth it though, I promise.

After our first five tapas, we were still hungry for more so we ordered three more...why not! One of my friends wanted "anything with chorizo" in it so we got an order of Huevos Fritos Con Chorizo Y Patatas which translates to fried egg with chorizo and potatoes. 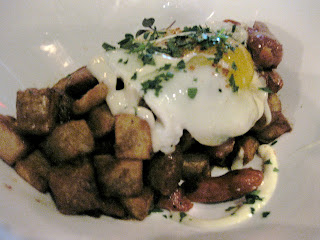 This one was similar to the patatas bravas but had that spicy Spanish sausage that added a little kick along with the fried egg, not too shabby.

Personally, I was craving some eggplant and so ordered the Berejenas Fritas (also in the verduras section). 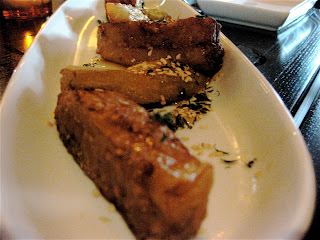 This was the only dish I was slightly disappointed in. Instead of crispy "eggplant fries" we got huge chunks of eggplant soaked in olive oil. Maybe they would have been better baked? I liked the honey and thyme drizzled on them, but I just couldn't quite get over how oily I felt after eating them. I was also fairly aware of how most of the tapas either had meat or seafood in them (unless you were ordering strictly from the verduras) so I was hoping this dish would've impressed me a bit more. It made me think that if we had had someone with us who was a strict vegetarian (I'm able to eat seafood so...I'm a pescetarian I guess?) it would have been difficult for them to share most of our tapas with us. 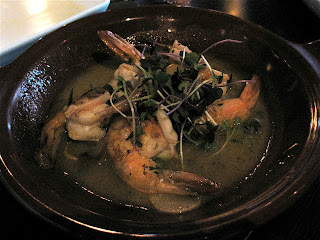 This dish was incredibly good, the simplicity of the garlic and lemon was complimented by the shrimp and salsa verde. And as with all of the tapas, even though I only got a bite or two, I was perfectly satisfied. My friends were shocked that they were full (though not uncomfortably stuffed) after a meal made out of small plates. I think as a culture we're trained to think that we need A LOT of a good thing...but sometimes you just need a bite! And that way you can try everything, what more could you want!

I was so happy with my experience at Boca Bistro and I can't wait to go back! If you check Savoring Saratoga's Facebook page you'll see that I posted an offer from Boca Bistro where you can get free tapas at happy hour...check it out and like my page while you're at it so you can get Savoring Saratoga updates!
Posted by Aliza at 1:45 PM
Email ThisBlogThis!Share to TwitterShare to FacebookShare to Pinterest