This past Saturday night I was in the mood for some classic pub food, something comforting, and we decided to try out the Seven Horse Pub on Phila. I had been there before for drinks, but never for dinner so I was pretty excited. We met up with some friends (running about ten minutes late as usual) and found them already settled in a cozy corner table. The dining room upstairs was reserved for a private party, but I liked eating downstairs, there was a casual, neighborhood feel that was very welcoming.

Our friends had already been given menus and water and when we sat down someone came around to get our drink orders, but never brought us menus (even though we asked). So after doing the awkward passing menus back and forth dance we were able to figure out what we wanted to order. Of course I had to start with a cup of their famous Sea Hog chowder, voted this year's People's Choice AND Best Off Broadway chowder! 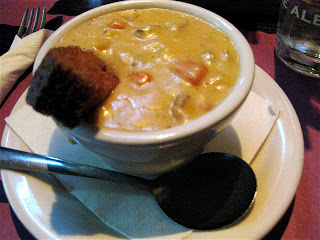 It came with a piece of fried cornbread (wow!) and I asked for it without the pulled pork on top, though I'm sure it would have tasted great with it. This chowder lived up to it's awards, it was thick and flavorful and warmed me right up. I could really taste the saffron and lobster, such a great combination! It was very filling though and in retrospect I should have just gotten a bowl as a main course since by the time my meal came I was pretty much full from the chowder.

But that night my eyes were bigger than my stomach and I ordered a cup of chowder and an order of fish tacos. 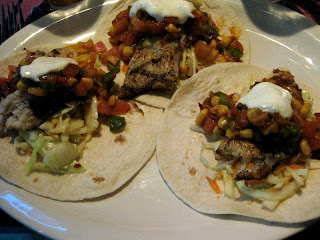 These tacos came with a spicy slaw, fresh salsa and Mexican crema. As with most tacos, these were difficult to eat without them exploding after the first bite. But that didn't make them any less delicious. I loved that the fish wasn't deep fried, a lot of times that takes a lot of the flavor away if there's more breading than fish. Everything was going fine until I took a big bite of what felt like an entire hot chili pepper. I'm pretty sure my mouth was on fire for a good five minutes, and all the crema and beer in the world couldn't help me. Long story short - the fish tacos were great, just be warned they are very much on the spicy side! 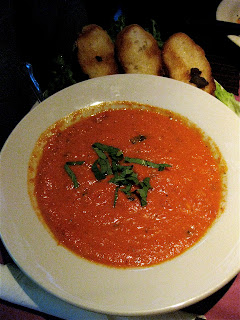 Sorry it's not the best shot, but aren't those adorable little grilled cheeses! (bet you didn't know food could be adorable, did you?) And there was something about that tomato soup that was just amazing. It was hearty and savory and was perfect for dunking the grilled cheese. Yum. Next time I go it'll be tough to decide between the chowder and the tomato soup.

The next entree ordered was the Eggplant Rollatini. 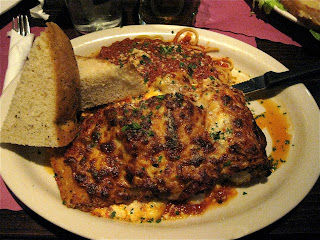 This was a huge serving of rollatini, fried eggplant with ricotta and marinara over spaghetti. The sauce was as good as the tomato soup, but the eggplant was way too fried for my taste. I always like, for either eggplant parmesean or eggplant rollatini, to have the eggplant on the softer/less fried side. Preferably soft enough so you wouldn't need that big steak knife that this rollatini came with. Even though it was not the most delicate dish, the flavors were still fresh and punchy.

The last dish ordered was the Bacon-Pepper Jack Burger with curly fries. 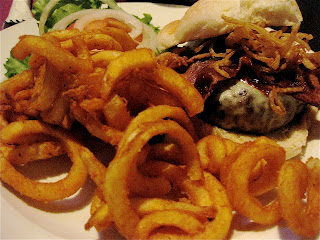 What could be better than salty bacon with pepper jack and crispy onions, honestly, look at that burger. The curly fries were fairly standard, meaning addictive and well seasoned, but the burger really stole the show. Needless to say, my date was one satisfied customer.

By the time we were finishing up our meals (8ish) the pub had definitely taken the turn from restaurant to bar. The families that were there with little ones were starting to head out and the drinking tables were starting to outweigh the eating tables and there could definitely have been a nice transition from dinner to Saturday night drinks. After this meal though I was ready for a night in and we called it an early night. I have to say, I was pleasantly surprised and impressed by the Seven Horse Pub and it will be at the top of my list next time I'm craving some casual, quality dining. Check it out, let me know what you think!

Posted by Aliza at 6:44 PM
Email ThisBlogThis!Share to TwitterShare to FacebookShare to Pinterest