I feel like it's been a while since my last post, sorry about that! The other night we went to Phila Fusion for dinner to take advantage of restaurant week. Instead we ended up taking advantage of happy hour, getting food that wasn't on the restaurant week menu, and paying about the same anyways. But that's getting ahead of myself, let me start from the beginning.

As soon as we sat down we were instantly greeted by our waitstaff. They are extremely attentive at Phila Fusion, I think we were asked at least four times if we knew what we wanted or had our drink orders ready before we even had a chance to open the fairly extensive menu. I felt like saying "calm down guys, let us breathe for a second". Other than the hovering, the atmosphere of Phila Fusion is very inviting - a good place to go out with friends, take a date, or have a big family meal. It's got a more sophisticated but still casual feel that I always like.

We didn't even realize that even though we were there on the weekend that happy hour was still in place from 4-6. Seeing as we got there about 5:45 we thought why the heck not, two for one drinks sounded pretty good. I was sticking to the Zen Ice Teas (right) which were so good you barely realized they were alcoholic (aka dangerous), while my date was drinking the sake-tinis (left) which packed a little more punch. 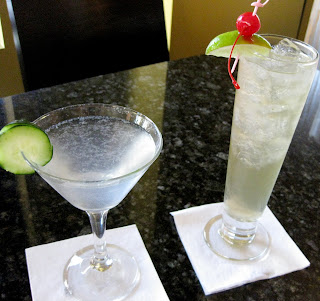 Aren't those some fancy looking drinks? I had never seen cucumber as a drink ornament but it was refreshing and complimented the sake with it's cool flavor.

For one of the appetizers we chose crab rangoon which is cream cheese and crab meat in a crispy little dumpling. 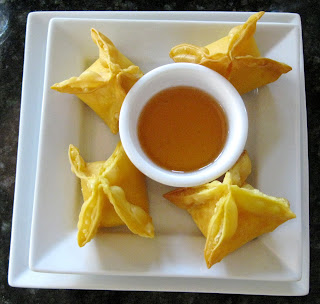 These are very rich but since you're only having one or two it's the perfect amount. The only thing I had trouble with was for whatever reason the shape of the dumplings and the gooey yummy insides made it difficult to eat gracefully, but oh well.

The other appetizer we got was an order of the Vietnamese fresh rolls with shrimp. If you've never had fresh rolls before you should definitely try them some time. It's vermicelli - which is sort of like glass noodles - with shredded lettuce and carrots and whatever else you pick which in our case was shrimp, all wrapped up in rice paper and topped with peanuts with a sweet dipping sauce. Yum. 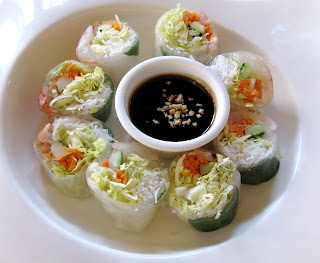 Every restaurant does fresh rolls a little different. Phila Fusion cut them up into cute little bite sized pieces and added basil which was the perfect addition to the rolls...see the dark green in some of them? And whatever that dipping sauce was was perfect, fresh rolls are so light and delicate that they need a little flavor punch with a sauce like that.

It was after our second appetizer that the restaurant had really started to pick up. When we first walked in we were one of probably three parties there. Soon though the restaurant was hoppin' and starting to get a little loud. At first I thought it was getting too loud, but I think that was just in comparison to how when we first walked in you could hear everyone's conversation and maybe even a pin drop. But once I got used to the noise level it felt more just like a bustling, friendly restaurant.

I was so excited when our main courses came! I got Spicy Eggplant that had fried tofu, eggplant, peppers, onions and basil. This dish definitely earned the two chili peppers next to it on the menu, it was spicy enough that I went through at least two glasses of water. But seriously, look at how fresh those vegetables are: 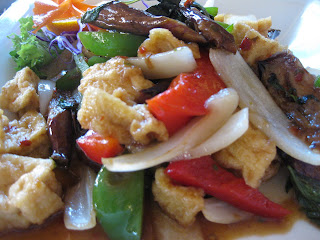 I truly believe that there is nothing that can take the place of satisfyingly spicy Asian food. And the entrees are huge, I was only able to eat about half of what was on my plate and was able to enjoy leftovers for lunch the next day.

My date also went for a spicy dish and got the Crispy Chicken Basil which was fried chicken stir fried with onions, red peppers, mushrooms and basil. This one also earned it's two chili peppers and was a completely different kind of spicy then my dish even though they both had "spicy sauce" on the menu. I feel like that's a good thing though, you don't want everything with spicy sauce to taste the same... 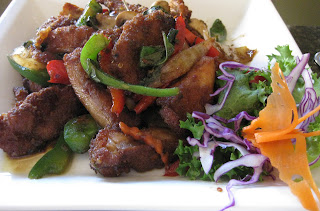 Like that little carrot butterfly on the corner of his plate? Don't worry, I got one too. A+ for presentation. 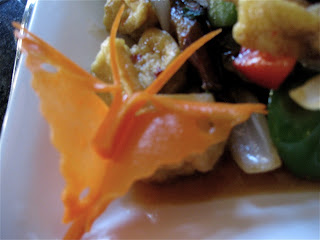 So I forgot to explain what I mentioned earlier about restaurant week. So restaurant week was an appetizer, entree, and dessert for $20.12. So my date got the crab rangoon, crispy chicken, and a dessert all from the prix fix options. But I wasn't feeling anything on the restaurant week menu so I chose the fresh rolls and spicy eggplant...which came out to about $20 anyway without a dessert. So I guess what I'm getting at is that it's a pretty good deal for the amount of food you're getting, and even when they try to do special deals it's barely less expensive than their regular menu!

So with that in mind, let's end this review on a sweet note (get it - because it's dessert) The two dessert options on the restaurant week menu were green tea or red bean ice cream. We went with the green tea and even got a cherry on top. 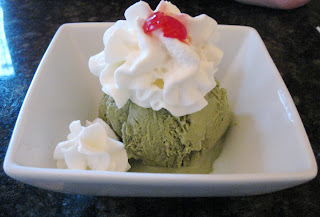 Green tea ice cream, for those of you who have never had it, is not your average ice cream. It's not very sweet and sort of has this chalky taste to it. It's not for everyone, and I don't think I've ever met a kid that likes it, but it's definitely an interesting flavor that's worth exploring. I happen to like it, but only a couple spoonfuls to stop my mouth from burning from a spicy meal. Next time you see it on a menu try it, you just might like it!
Posted by Aliza at 9:11 AM
Email ThisBlogThis!Share to TwitterShare to FacebookShare to Pinterest