This past Sunday a group of us went to Max London's for brunch. This was a pretty big deal because the past two times we tried to go the wait was almost an hour! So third time was the charm and we had a game plan - instead of going at normal brunch hours (I'm thinking 11-12ish) we went at 1:45. And it worked, we only had a ten minute wait! So I think that's the trick from now on, have a small snack for breakfast so you can last until early afternoon for a late brunch.

Needless to say, after not being able to go twice I was more than just a little excited for brunch at Max's...and I was not disappointed. First off, the coffee. Instead of having a tiny cup of coffee that I'm constantly trying to catch the waitress to refill, we got a HUGE french press for the table. I know it sounds like a little thing, but I loved the fact that I got the perfect sugar/milk/coffee ratio from being able to refill the coffee by myself. Does anyone else know what I mean or am I just a coffee snob?

I also really liked the decor of the place, I had never really made it past the bar (they have amazing happy hour specials and appetizers), but it's a pretty great space. There's an interesting mix of modern and country that you would think would clash, but Max somehow makes it work. The restaurant was also much more kid friendly then I would have thought, we saw a lot of young families enjoying brunch with high chairs and everything.

The coffee was not the only exciting thing on our table, the food was pretty amazing too. I got the salt cod-potato cakes which I've decided is like the badass version of eggs benedict with a Portuguese spin. 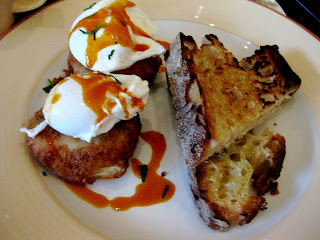 Instead of english muffins there were cod and potato cakes that were surprisingly delicate and truly melted in your mouth. And then on top of the poached eggs there was hot sauce instead of hollandaise. The toast on the side was more something to snack on after the fact, because nothing could distract me from those eggs and cakes. One thing that I noticed is that unlike eggs benedict, after I finished I didn't feel over-full or anything like that since it was such a light meal.

The bread for the toast was definitely high quality which leads me to the next dish that my friend got - french toast with cinnamon butter and local (real) maple syrup. 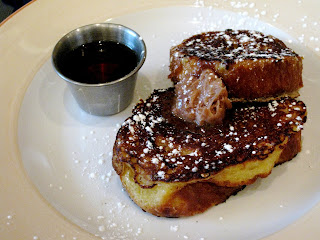 I like that you can tell just by looking at the picture how good the bread is. I wonder if Max gets a family discount on bread from his Mom next door...Another thing that my friend pointed out about the french toast was how much he loved the cinnamon butter. Has anyone ever had that experience where you get french toast that has cinnamon sprinkled on top, you take a bite and accidentally inhale dry cinnamon and then you're coughing up a storm? Doesn't that stink?

He also got a side order of potato hash. How cute is that little cast iron dish! 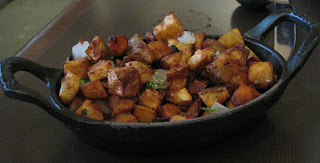 This side was pretty big for one person so the whole table got to have a little bit. The hash was crispy and well seasoned, not greasy at all! And I love onions with anything potato so overall this hash got two thumbs up.

The next meal was a tuna sandwich with a side salad. This was one of the most interesting tuna salads I have ever had. 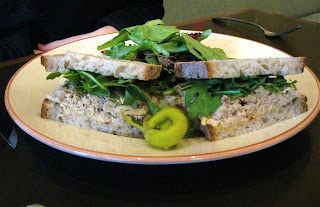 The tuna had chopped red onions in it which I always love but is pretty classic. What made it interesting was the arugula which gave it a peppery taste, combined with an orange aioli that was sweet and citrusy. It was that kind of taste combination where you kept wanting to take another bite to figure out which flavors were what. Not too shabby.

Last but not least there was a croissant breakfast sandwich. 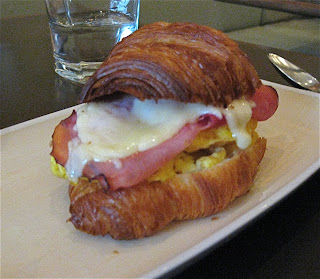 This is not your average breakfast sandwich - it's got fontina cheese, scrambled eggs, and smoked ham. I smelled this sandwich before I even saw it, for a vegetarian I really do love the smell of smoked meat! And having a croissant instead of a roll or english muffin made this sandwich stand out even more, how could you say no to such a light and buttery pastry?

This was a fantastic brunch experience, and even though there's always a long wait they are open until 3 so maybe try going a bit later? It's definitely worth it, and it just means that words gotten out how good Max London's brunch is so you gotta plan ahead. I had to work later that day so I didn't get a chance to try their breakfast cocktails, does anyone have their favorites? Leave a comment and let me know so I can try it next time!
Posted by Aliza at 2:20 PM
Email ThisBlogThis!Share to TwitterShare to FacebookShare to Pinterest