I went to The Turf Club almost a year ago and thought I would check it out again now that it's got Beverly and seems to have been making an effort to mix things up a bit. We walked on over and once we got there, around 12:30 on a Sunday morning, we were literally the only people there. It's like nobody knows about the place or something! It was nice not to have to wait for a table for Sunday brunch, but it's a little unsettling to walk in to a completely empty restaurant.

After settling in and ordering a coffee we checked out the menu - and it certainly looked like things had changed since last time I was there - and I recognized some of the choices from Beverly's menu. I ended up ordering a German Apple Pancake with homemade coconut syrup. 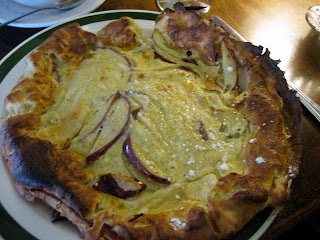 It was huge! I had never had a german apple pancake before, but it kind of reminded me of a popover. It was pretty good, but I think I would have preferred to have shared it and then gotten something with a little more substance, like eggs, on the side. As much as I love sweets, sometimes I need a savory breakfast that I can really dig in to and feel full afterwards. With this dish, I could only eat about half of it until I slid it over to my date to finish off.

The coconut syrup was really interesting too. I don't know why, but when I saw it on the menu I assumed it would be coconut flavored maple syrup. Instead it was exactly what the menu said it was, coconut syrup! It felt like something that you would use to flavor something else like coffee, it was a bit too intense when I poured it all over the apple pancake. Oh well, live and learn.

My date started off with the fresh fruit of the day and the Smoked Salmon Platter. 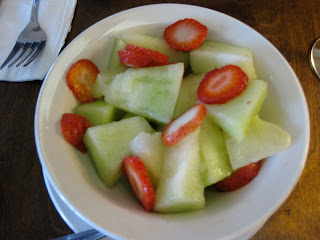 I'm not gonna lie, the fruit was pretty disappointing. The honeydew was barely ripe and there was probably a grand total of two sliced strawberries in there. And how much did this cost? $4.50, which is probably about how much an entire honeydew costs. I was hoping it was going to be the kind of honeydew that literally melts in your mouth it's so ripe, but that was definitely not the case. Now that I'm thinking of it, the last time I was there they had an issue with their fresh fruit... 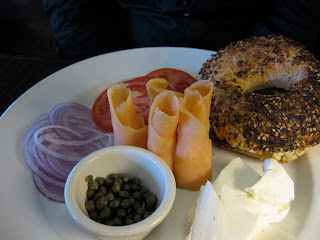 This was pretty much a fancy do-it-yourself bagel and lox sandwich...which don't get me wrong is one of my favorite breakfasts, but I really don't think it needs to cost $15. Overall I felt that our meal was pretty overpriced, when the quality of food was only average. The one positive aspect of our meal was we had an extremely friendly waiter who was humming his way around the restaurant and always asking if there was anything else we needed. The thing is though, you need more than a great waiter to make me want to come back and I think my second experience at The Turf Club may have been my last.
Posted by Aliza at 10:56 AM
Email ThisBlogThis!Share to TwitterShare to FacebookShare to Pinterest