Now I know there's already a fabulous review on Hattie's brunch by Jenny from Mamatoga, but I realized the other day that I've been living here for so long and I've never been! Granted - Hattie's doesn't scream "vegetarian friendly", but still, it's a pretty classic local favorite. So this past Saturday night we decided it was time to check it out and see what all the fuss was about.

Before we even walked in I knew I was going to fall in love with the decorations and the feel of the place when I saw this outside. 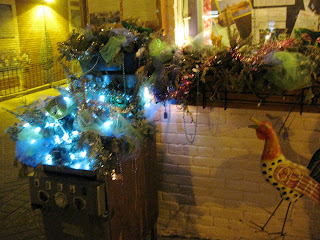 How cool is that? Hattie's automatically got funky points for the old stove and then when we walked in there were so many other chicken themed decorations (not in a tacky way) with checkered tableclothes and mardi gras knick knacks...so perfect. In fact, I was so content reading all of the old newspaper clippings on the wall and admiring the pictures that I barely noticed the fifteen minute wait we had for a table. We ended up sitting at a cozy table in the corner, close enough to other tables to feel neighborly but not overcrowded.

So for those of you who don't know much about Hattie's, they serve Southern and Louisiana style food and are particularly famous for their fried chicken. Apparently I am not very familiar with Southern food, something I didn't even realize until I looked at the menu and discovered that I hadn't had (or heard of) a good amount of what they offered! So my date and I decided to just go ahead and try everything!

I started this adventure with a mint julep. This is how much I don't know about Southern food - I had this idea that a mint julep was a drink that was light and sparkly...maybe even with sugar on the rim or something. Instead, what I got was straight up Bourbon. 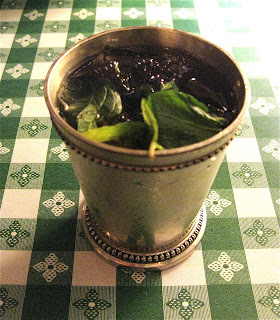 Not that it wasn't good, just not what I expected and very intense. This drink is Woodford Reserve with a few springs of mint and little bit of simple syrup. And I love that they served it in the traditional pewter cup, keepin' it classy. Let's just say I had to let the ice melt a considerable amount before I could drink it without making that "my throat's on fire" grimace.

Then for an appetizer we ordered something that neither of us had ever had before - Hush Puppies! 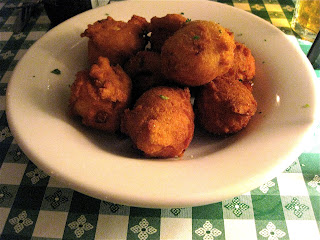 These pups are pretty much fried pieces of corn bread. It felt good to eat something hot after walking in the cold, but they weren't particularly remarkable. Maybe if they had a dipping sauce or something? We ended up dousing ours with hot sauce and agreed that it would have been just as nice to get those instead of the complimentary basket of biscuits before our meal. And it was definitely a lot of carbs to have right before a HUGE dinner. Fair warning if you go with only two people - you probably don't need an appetizer because the main courses are so. much. food.

My date got their famous fried chicken with smashed potatoes and succotash. What is succotash? Good question, we didn't know either which is why we both ordered it with our meals. Succotash is a side dish that is corn and lima beans in a tomato based sauce. 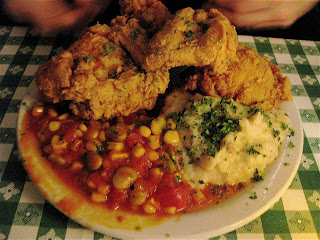 We were both really glad we tried it too, it's delicious! It's got this great combination of the sweetness of the corn and the tang of the tomato, and the lima beans add a great texture to the dish. And look at that chicken, I told you it was a lot of food right? Our waitress assured us that the chicken would taste just as good as cold leftovers the next day, so no pressure to eat everything on your plate!

My new thing that I was trying that night, besides a mint julep and hush puppies, was catfish! I was worried there wouldn't be much that I could eat there but there were a couple fish options, plus mac and cheese and a beans a rice dish. The catfish was really good but so heavily fried that there was more fried than fish. I ended up taking of the bottom part of the breading and eating it like that which was just as good. 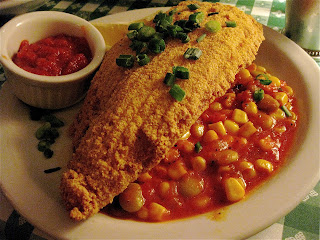 I think I would have been more ok with the catfish being so heavily breaded if it didn't seem like everything we were eating was deep fried - welcome to the South I guess? Don't get me wrong, the catfish was really good, I just felt like I needed a little break by the end. I also loved that they served it with cocktail sauce, nothing like a little kick of horseradish to make a dish exciting!

Another thing that I really like about our waitress - she was very friendly - was that she was accommodating with substitutions. The appetizer special was fried okra with a creamy vinaigrette dipping sauce. I looooove fried okra but couldn't handle another appetizer so she let me make it one of my two sides. So I ended up with succotash and fried okra, but I guess the kitchen on confused and gave me an appetizer size side. Even more food! 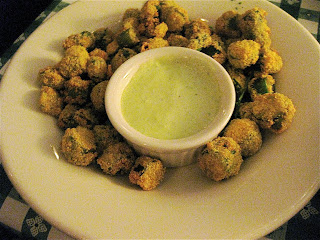 After we made a sizable dent in our meals, I couldn't even begin to think about dessert. They all sounded so amazing and chocolate-allergy friendly, but I just couldn't do it. Maybe next time we'll split a dish so we have room for dessert? Once you get that huge plate of food it's hard not to eat it all it's just too good. So I definitely recommend Hattie's to everyone, it holds a lot of Saratoga history and the food is a whole lotta home comfort goodness.
Posted by Aliza at 4:54 PM
Email ThisBlogThis!Share to TwitterShare to FacebookShare to Pinterest