This past Sunday I went to Sperry's for brunch with three friends. I didn't know anything about Sperry's except that it's the same owners as the Circus Cafe and that they have a particularly interesting brunch menu...that was more than enough to get my interest. I mean, check out their menu, they have cheddar jalapeno grits, how could I not go try them out!

When we walked in at 11 I noticed we were one of the few parties there - definitely a plus since getting a table for Sunday brunch in Saratoga can be a little competitive to say the least. Since it was the first time there for everyone we got a quick tour of the restaurant before getting to choose our table. We chose to sit in the side room where we were surrounded by great caricatures on the walls and music that definitely had some soul to it. Our waitress was very patient with us as we tried to decide what to order, there were just so many things I wanted to get!

I ended up getting the Basil and Feta Cheese Egg Scramble. Once you combine eggs and pesto, I'm sold. 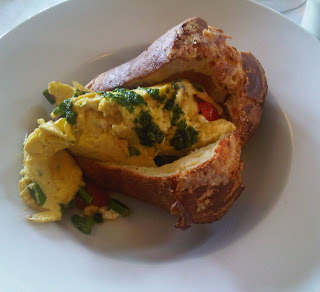 And do you see that amazing pastry holding the scrambled eggs, pesto, asparagus, and tomatoes? That my friends is a POPOVER! I was surprised to learn that not many people have heard of popovers, and I've definitely never seen them in a restaurant before. To be honest, I have never met a popover that can hold a candle to my mom's. This came pretty darn close though (sorry Sperry's, I'm holding you to some tough competition). And I loved the fact that my eggs were actually inside the popover. Way to go Sperry's.

There were actually two orders of the omelette of the day: ham and gruyere. 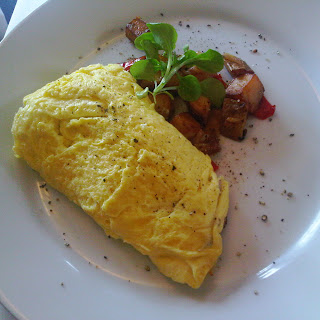 I'm not a big ham person, but gruyere makes everything delicious and my friends certainly enjoyed their omelettes, one with home fries and the other with the cheddar jalapeno grits. I was also told to mention that the home fries were "perfect" (they were pretty good, I managed to steal a few before they were all gone). My friend was impressed though, saying that these home fries were the perfect consistency since at most other places they are either soggy or burnt.

The next and last dish that I want to talk to you about was pretty unique, definitely something that caught my eye on the menu. 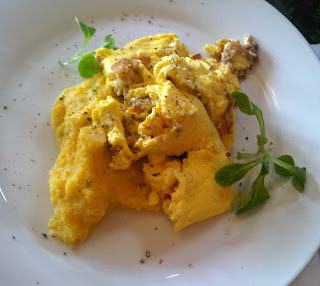 The Hangtown Fry is scrambled eggs, bacon, and FRIED OYSTERS! And I know it looks like there is just a crazy amount of eggs on the plate, but half of what you see is the cheddar jalapeno grits. I don't know about you, but I have never had oysters with eggs before, or even really seen it on a brunch menu. Apparently this dish was created during the California Gold Rush - so Sperry's gets point for this dish being creative, tasty, and historically accurate. What a trifecta.

Now normally I'm not one to order dessert with brunch, but once again, when our waitress gave us a menu we just could not say no. This first dessert is a three layered masterpiece with hazelnut meringue, praline buttercream, and chocolate ganache. 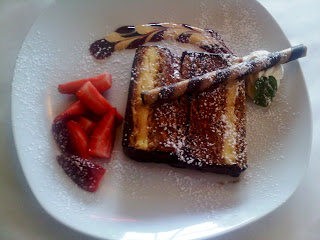 The other, more Aliza-friendly (what my friends call chocolate-free desserts) dish was a Pecan Praline Bread Pudding. 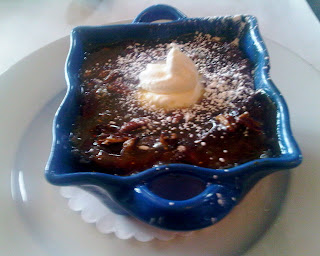 WOW! Even though we were sharing this between four people, I would say we could only get about halfway through. This bread pudding was incredibly sweet and rich, though not in an overbearing way. Besides the fact that it was so intense, there was just so much of it that I would definitely recommend getting it to share.

We also enjoyed some brunch cocktails....like that little photo shoot we did with the menu? 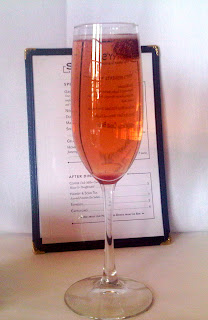 One thing that's important to note though is that apparently it is illegal to serve alcohol before noon on Sundays. Definitely news to us! So instead of having cocktails with brunch we had them with our desserts, no biggy. But if you're having brunch on the earlier side, make sure to time your orders so that you can still enjoy your bloody mary or mimosa (legally) with your meal.

All in all, Sperry's was a great find. I thought they put an interesting spin on brunch and I like that it seems like they had fun with the menu. Next time I might just have to try to lemon ricotta pancakes. You know it's a good restaurant when you're already thinking about the next meal you want to get!
Posted by Aliza at 9:04 PM
Email ThisBlogThis!Share to TwitterShare to FacebookShare to Pinterest